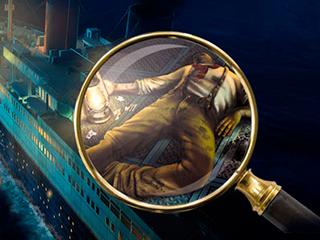 Inspector Magnusson: Murder on the Titanic

Unravel a tale of murder and conspiracy on the RMS Titanic. On the fateful night of April

14, 1912, the body of lowly coal tender Charles Taylor has been discovered deep within the bowels of the famous ship, a victim of murder most foul. Captain Smith recruits Professor Jakob Magnusson, renowned Swedish scholar and former police inspector, to lead the investigation. As the Professor follows the killer's trail throughout the ship, a dark conspiracy is revealed: the victim was no simple laborer, and his murder was just the first transgression of a much more terrible crime. Travel from the depths of the ship's engine room to its finest suites and lounges as you try to uncover who murdered Charles Taylor, and why. As the clock ticks towards the Titanic's icy rendezvous, you must search for clues, explore unique locations, and solve puzzles in this thrilling adventure to piece together the evidence that reveals the dark conspiracy connecting the murder to the doomed ship's tragic destiny!

27 locations to explore aboard the magnificent RMS Titanic!

28 Hidden Object scenes to test your powers of observation!

26 challenging puzzles to test your wits

Meet some of the Titanic's historical crew, and dig up their secrets