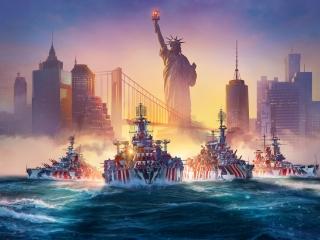 World of Warships is a massively multiplayer online game. Players are invited to become commanders of their very own warship and amass a great naval fleet of 200+ recreated vessels

from the first half of the 20th Century, including the most iconic warships of both World Wars. Players are engaged in large-scale battles on massive maps with dynamic, gameplay-impacting weather.

Choose which nation is most to your liking

The weather at sea can be volatile: rain, snow and fog!

At sea, there are always plenty of opportunities for heroic deeds and achievements!