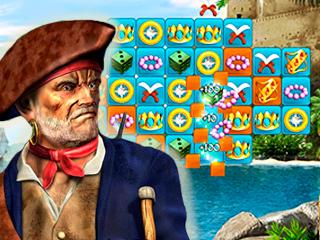 Well, shiver me timbers! It's time to raise anchor and set sail for new adventures in Treasure

Island 2. Help our hero, Redrum Bilgewater, capture sought-after treasures and navigate buccaneer-infested waters. The Dread Captain Weevil, scourge of the Seven Seas, has vowed to take revenge on the Twelve Islands if his golden peg-leg is not returned. It's up to you to collect enough gold to satisfy his demands before he unleashes his skeleton army's wrath!

Get acquainted with famous pirates